The plaintiff, a third-year law student who was riding his bicycle to school, attempted to cross Dearborn Street from Delaware Street on the corner where the Park Newberry high rise building was being constructed. While stopped inside a construction sidewalk canopy within the Dearborn street crosswalk, the plaintiff looked for oncoming traffic and thought it was clear. As he entered into the moving lane, he was struck by an oncoming taxicab, ejecting him from his bicycle and rendering him a wheelchair-bound, paraplegic.

The plaintiff alleged that the placement of the construction canopy created a sightline traffic blind spot for users of the crosswalk. Using traffic-engineering standards and computer-simulated models of the intersection, the plaintiff's Kurt Lloyd demonstrated that the canopy interfered with the minimum sight line distance for a bicyclist to see and react to an oncoming vehicle or for an oncoming vehicle driver to see and react in a reasonable stopping time to an emerging pedestrian/bicyclist. 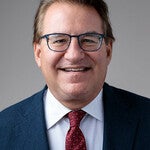